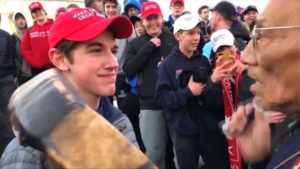 A student of Covington Catholic High School, Nicholas Sandmann has made plans to sue CNN for about $250 million over alleged “vicious” and “direct attacks” on him.

“Now you say you’ve seen the tape; if you took the time to look at the full context of what happened that day, Nicholas Sandmann did absolutely nothing wrong, he was, as I’ve said to others, he was the only adult in the room. But you have a situation where CNN couldn’t resist the idea that here’s a guy with a young boy that Make America Great Again cap on. So they go after him.” Wood said.

Speaking on CNN’s quick spread of the propaganda without investigations, Nicholas’ attorney said, “The CNN folks were online on Twitter at 7 a.m. retweeting the little one-minute propaganda piece that had been put out. They’re out there right away going after this young boy. And they maintain it for at least two days. Why didn’t they stop and just take an hour and look through the Internet and find the truth and then report it? Maybe do that before you report the lies.”

The controversial post which arose in January has caused Sandmann, his family, and many students from Covington catholic high school to face severe stress comprising death threats, job threats, and a nationwide social media reaction over the accusations leverage them.

Wood has disclosed details of the timing of the law suit, he said it will be issued “Monday, Tuesday at the latest.”