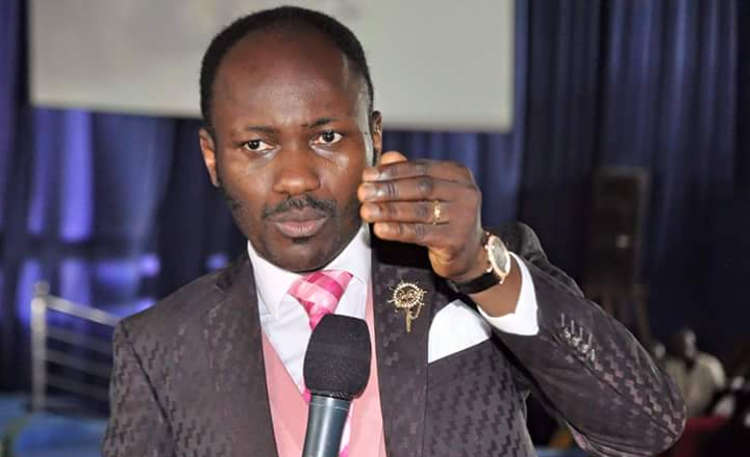 Senior Pastor of Omega Fire Ministries, Apostle Johnson Suleman has given what he describes as commandments to husbands as received from God, just as the 10 God gave to Moses. Congregants dominated by men took to their papers as they wrote what the man of God dictated. “Thou shall have no other wife except one. … Continue reading →

Popular Pastor and General Overseer, Omega Fire Ministries, Apostle Johnson Suleman has cried out over the incessant kidnappings of his church members by Fulani herders. In a tweet by the controversial Pastor via his official Twitter handle, @APOSTLESULEMAN, in the early hours of Sunday, June 9, he disclosed how three of his close members were … Continue reading →

Following Apostle Johnson Suleman’s recent acquisition of a private jet, the Senior Pastor of the Awaiting The Second Coming Of Jesus Christ Gospel Church, Pastor Adewale Giwa has hit out at pastors who buy private jets. Pastor Giwa who expressed his displeasure at the act in a statement issued on Friday to Daily Post, is … Continue reading →

Founder and General Overseer of Omega Fire Ministry International, Apostle Johnson Suleman has advised the People’s Democratic Party Presidential Candidate at the February 23 elections, Alhaji Atiku Abubakar to “go home” rather than head to the courts to challenge the outcome. Apostle Suleman who made the appeal during a sermon on Sunday at the church … Continue reading →

Tuesday’s terrorist attack in Nairobi, the Kenyan capital has attracted condemnations from Christian leaders both within and outside Nigeria. The list of reactions has continued to swell with President of Omega Fire Ministries Worldwide, Apostle John Suleman voicing out against the incident. Apostle Suleman, reacting to the attack through his verified Twitter account, spoke against … Continue reading →