The Gruesome Murder of Church Worshippers in Nigeria

Posted on June 6, 2022 by giantabilitymn 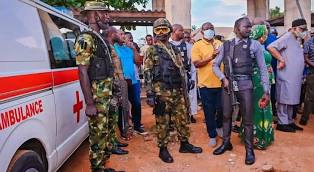 The news of the gruesome murder of more than 100 worshippers in the town of Owo and in Ondo State of Nigeria is unprecedented going by how dastardly and barbaric the incident was. The gunmen invaded the church and shot sporadically and used explosives against the worshippers who gathered at St. Francis Catholic Church, Owo, to mark the Pentecost day. As heart-wrenching and devastating the incident is, reacting to this magnitude of loss in one day and in a town like Owo, one would have expected that the stakeholders from the governor to the traditional rulers and all concerned citizens would spit fire when making comments on the issue. The Christian Association in Owo as well as representatives of the Muslim community reacted and condemned the heinous crime. The governor of the state, Mr. Rotimi Akeredolu, Senior Advocate of Nigeria (SAN), who was in Abuja for the APC primaries, had no choice than to return home quickly. In his reaction, he indicated that the gruesome murder of the innocent worshippers is worse than all the mass shootings that are being recorded in America.

All these are expressions of how painful and unimaginable the incident is. However, the truth of the matter is that Nigeria is not safe at all, and the lives of the citizens are used in playing politics. Why the mass shootings in America cannot be compared in any way with what happened in Owo, yesterday, Sunday, June 5, 2022, is because all the mass shootings in America had their perpetrators brought to justice. It is either that the perpetrators took their lives in the process or were arrested by the security agents and made to face the law. But with the case of Nigeria, when life is lost, especially in this kind of way, where terrorists are at liberty to do what they know how to do, the hope of bringing the perpetrators to justice is also lost immediately with the loss of the precious souls.

Where the situation is like I’ve described it, the pertinent question to ask is who is behind these callous acts and who also are the sponsors of such crimes. The answer to the question of why and who the perpetrators were is as simple as ABC. Any act of terrorism in Nigeria since the time that the All Progressive Congress (APC) Party and the Buhari-led government came to power was carried out with the backing and knowledge of the government. It is foolishness and stupidity for any right-thinking, perceptive Nigerian not to be able to read the handwriting on the wall correctly and draw out relevant information.

Another important point is that I doubt it much if those terrorists who invaded the church were Christians. It is either that Nigerians are not seeing what I’m seeing or they are not thinking what I’m thinking. A good example to follow when the Texas elementary school shooting happened in America, the American flag was flown at half-mast, which is a sign of respect to the victims and their families as well as an expression by the Joe Biden administration of how valuable the lives of Americans are.

The killing in Owo serves as a test to the Buhari administration and will be the last straw that breaks the camel’s back. As I said earlier, the APC primaries were scheduled for the 6th and the 7th of this month, and from all indications, this unfortunate incident of the Owo killings is not strong enough in the judgment of the APC and the Buhari-led administration to warrant the postponement of the APC primaries.

It has been known already by Nigerians that lives of humans in Nigeria since APC came to power in 2015 have not been considered more valuable than that of a cow. I believe you all know what I’m talking about, in reminiscence of the Fulani herdsmen killings of innocent farmers in the middle belt and the southern parts of Nigeria to which thousands of lives were lost under the watch of the present APC-led government and Muhammadu Buhari. This is the same president of Nigeria that is asking the APC governors to allow him to choose for Nigerians his successor. This request is not different from someone like Adolf Hitler of Germany with all the evils and wickedness that he committed in the world, asking the world to allow him to choose his successor. This is nothing other than MADNESS in the corridors of power.

I am worried because I have a feeling that most of the elites in Nigeria and the politicians are deserving of mental health evaluations. Something is wrong when the educated comport themselves in ways and manners not different from those of the illiterates. For instance, all the aspirants who are gunning for the presidential position of the country are either shying away from telling the truth or are fake and hypocrites, by not touching on the main issues that can, if not move Nigeria forward, at least keep the country surviving. I am very positive and confident in my belief and conviction that Nigeria has only two options if it will not die an untimely death, and these options are the complete restructuring of the country or the disintegration where the Yorubas and the Igbos, who are agitating for self-determination, should be allowed to go peacefully.

Nigeria has just one major obstacle on its way to survival, and that obstacle is the 1999 Constitution which is fraudulent being imposed on the country by the military junta and the Northerners on the other hand, who are yet to know what to do with their Almajiris. The Almajiris, you may wish to know, form the nucleus of the Boko Haram terrorists as well as the bandits. The Almajiris are children who were deprived of formal education by the choice of their parents, who preferred that they acquire the knowledge of the Koran. Unfortunately, this kind of knowledge acquired by them has no place in the Constitution of the country, and therefore does not guarantee for them gainful employment. What do you expect from youths who have no formal education and no skills to do any trade? Is it surprising that they end up as terrorists and bandits?

The North is the problem of Nigeria. Recall what happened in Sokoto recently where Deborah Samuel, a female student at the Shehu Shegari College of Education was burned to death by her colleagues on the grounds that she blasphemed agains Prophet Mohammed.

Permit me to say this as I close. Let’s assume that all the aspirants running for different positions are all good drivers, but what happens when the vehicle they are to drive has no engine at all to drive the body. I think all that one can see, I mean those who have the seeing eyes and are perceptive, is the body of a very good bus but without an engine.

The Constitution of the Federal Republic of Nigeria is not designed to unite Nigeria, and to this end, nothing good should be expected. Why the wasted efforts in politicking? People talk about the 2023 election as if just crossing over is all that is needed to get to the promised land. That is far from being the truth. My candid opinion is that Nigerians have the last opportunity to rise up against bad governance and if democracy is not supported by those who introduced it, I think it is time to jettison it. People say that the worst democracy is better than the best autocracy. That only makes sense where the democracy in question has dividend, which flows to the people.

I have now come to a conclusion that no foreign country can help Nigeria to develop. If Nigerians are not ready, it is time to forget about anything Nigeria, for in doing just that lies the survival of not the country, Nigeria, but that of the people. Stupid and foolish politicians will tell you “Nigeria first,” whereas in reality and if democracy is truly about the people, it should be the people first.

I rest my case here. The question is will the perpetrators of the evil committed against the people of Owo and the Christian body be fished out. What happens, in respect of whether there is the political will to bring the perpetrators of this act to justice or not, will clearly show Nigerians and the international community where next the country goes from here. Hope not into extinction, but if that is the only way out for the people, let it be, and God bless us all!