What’s This? Another Holiday?

Posted on July 6, 2021 by giantabilitymn 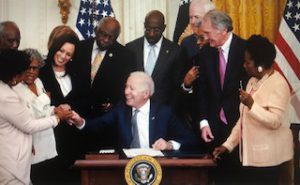 What’s this?  Another holiday?  Yes, on June 17, 2021, President Joe Biden signed into law the Juneteenth National Independence Day Act, and with that, Juneteenth is now a federal holiday;

What is Juneteenth you may be asking?  June 19th, or Juneteenth, as it is commonly known, is the commemoration of the freeing of slaves.  Now, while it’s true that President Lincoln freed the slaves in his Emancipation Proclamation in 1862,  not all slaves were set free by the January 1st deadline set forth in the Proclamation. the word..  His proclamation stated that on January 1st, 1863 all slaves were to be  made free.  However, for a couple of reasons this is not what happened.  One reason is that some slave masters withheld the news of the freedoms brought about by the Proclamation.  Another reason is that there were insufficient troops available to enforce the tenets of the Proclamation.   Thus, some people remained enslaved.

So why June 19?  What is the significance of that date?  Well, in June of 1865, some two and a half years since the Emancipation Proclamation, federal troops were sent to Galveston , Texas to help with enforcement of the nation’s stance on slavery.  On June 19, General Order No.3, which was read in various locations across the city, announced that all slaves were free.  The Order reads in part:

“The people of Texas are informed that, in accordance with a proclamation from the Executive of the United States, all slaves are free. This involves an absolute equality of personal rights and rights of property, between former masters and slaves and the connection heretofore existing between them, becomes that between employer and hired labor…”

The reading of this order, no doubt, sparked an air of thankfulness and celebration that  would be present for years to come

Texans celebrated the first Juneteenth on June 19, 1866, the one year anniversary of the reading of the order that let them know they were free.  They held events such as parades, cookouts, and prayer gatherings.  Over the years, celebrations spread throughout the country.  But in 1980, Texas became the first state to declare Juneteenth a state holiday.  Many states eventually followed suit, with several recognizing Juneteenth as a holiday long before President Biden decided to make Juneteenth a federal holiday.  Juneteenth is the first federal holiday enacted since Martin Luther King Day became a federal holiday in 1986.

What does marking Juneteenth as a federal holiday mean to the African-American public and to the country as a whole?  Well, General Order No. 3, mentioned above, makes a strong promise of equality.  Yet, these days we, as members of this country, are still battling inequality, racism, and unfairness.  While making Juneteenth a holiday can not cure those things, it is a step in the right direction.  It helps  America acknowledge that it has a past that needs to be owned up to so that it can move forward.

This country has a background in slavery that can not be erased.  The effects of slavery have lingered and continue to linger in our everyday lives. We have, in our history, stories of people like Emmitt Till, who was beaten brutally for supposedly flirting with a white woman.  Presently, we are focused on stories of people like George Floyd, who lost his life at the hands of a white police officer.  In fact, we are all waiting to see if Congress will pass the George Floyd Justice in Policing Act.

The Act would be another great step toward acknowledging the problems of America and working to address them.  While we wait for Congress to vote on the George Floyd Justice in Policing Act, we can at least revel in the fact that, for the Juneteenth National Independence Day Act, the vote was nearly unanimous, with all voting for it in the Senate, and a 415 to 14 vote in the House of Representatives.

President Joe Biden said during the signing of the Juneteenth National Independence Day Act “I’m especially pleased that we showed the nation that we can come together as Democrats and Republicans to commemorate this day with the overwhelming bipartisan support of the Congress. I hope this is the beginning of a change in the way we deal with one another.”

President Biden also indicated that he believed his signing of the Act was a great  accomplishment for him and his presidency.  And indeed it is a great accomplishment to see this day in our history acknowledged in such an important way.

Now, you may not have had time to get ready to celebrate Juneteenth this year.  After all, the Act was signed into law just two days before the actual Juneteenth date.  But now you have nearly a year to prepare for it.   You can check out sites on the web to find out how people traditionally celebrate Juneteenth.  Maybe your city hosts activities, or maybe you can host your own.  But whatever you do, think about how the slaves must have felt on that date, June 19, 1865.  Think about what freedom meant to them then, and about how far we as a people have come, and how far we still have to go.

What’s this?  Another holiday?  To Juneteenth, I say, yes, yes, yes!