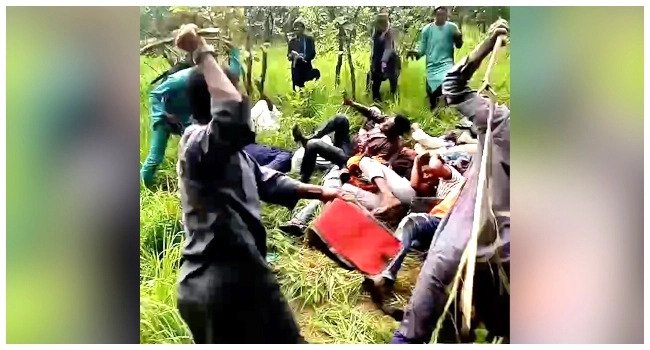 The terrorists who have been on the necks of Nigerians killing both the military and the innocent civilians have threatened to abduct President Muhammadu Buhari of Nigeria and Governor Nasir Ahmad El-Rufai of Kaduna State in a video widely circulated. In trying to make good their threats, they attacked the Presidential Guards on Monday, July 25th and killed 8 soldiers. Recall that these same terrorists attacked the Kuje prison on July 5th and released about 1000 prisoners including 68 Boko Haram terrorists who have been in prison for almost 10 years.

What needs to be taken into cognizance with all the threats that have been made by terrorists about how they plan to kill the remaining 40 abductees of the Abuja-Kaduna bound train which was attacked on March 28th as well as the abduction of President Muhammadu Buhari and Governor Nasir El-Rufai of Kaduna state is that the abduction of the President and the Governor is diversionary. That is, it is a way of taking the eyes off Nigerians and the international community from the roles being played by these two actors who are active supporters of the terrorists.

Recall that Governor Nasir El-Rufai has always been known for his sweet speeches about how he claims to know where the terrorists are, be listening to their conversations, and be suggesting that their camps should be bombed in different locations at once. In the end, he was also given contrary opinions why it would be unwise to do what he had earlier suggested using the lives of the abductees that need to be protected as a reason why the earlier position should be jettisoned. This is nothing but speaking from the two sides of his mouth.

For the President and Commander-in-Chief of the armed forces of the Federal Republic of Nigeria, Muhammadu Buhari, he has always been lackadaisical with regards to taking actions against the terrorists. All he was doing has been promising that the terrorists would be apprehended and brought to justice.

Recall that both the President Buhari and the Attorney General of the Federation Abubakar Malami had said severally that they have more than 1000 names of the Boko Haram terrorists with them, aside those 8 names of the sponsors of terrorists that were handed over to Nigeria by the government of the United Arab Emirates. What has been done with all the names that they claim they have apart from promising to prosecute them remains a question to be answered.

Nigerians should not be surprised if one day they wake up to hear or discover that the presidential villa has been overrun by the terrorists. This is a possibility.

The game being played between the terrorists and the leadership of Nigeria is clear and it is nothing other than that of deceit, conspiracy, and hypocrisy. President Muhammadu Buhari has indirectly granted one of the requests of the terrorists by allowing for the invasion of the Kuje prison, whereas the 68 members of the Boko Haram terrorist group have successfully escaped. Nothing also is being done to release the abductees of the Kaduna bound train that was attacked by the terrorist since March to date.

Out of the 60+ abductees, 40 are still in captivity with no hope of being released without ransom being paid. Those that have been released had their family members to pay their ransom, and that was in millions. With the rest in captivity, the terrorists have threatened to kill some of them and sell the rest as slaves as they did to the Chibok girls who were abducted in 2014.

There is no gainsaying the fact that Nigeria is under a siege, and the government in power has lost control. All the fighter jets and the Tukano fighter planes that Nigeria bought from America are useless, being an action taken to deceive the international community and as camouflage. At this juncture, the presidential flagbearer of the All Progressive Congress (APC) in person of Bola Ahmed Tinubu, and the two other presidential flagbearers who are Northerners of both the PDP and NNPP in persons of Abubakar Atiku and Rabiu Kwankwaso should bury their heads in shame. The reasons being that APC is the government in power that has failed the country woefully, and Buhari being a Northerner who also has failed to secure the country in his eight-year tenure of office.

In conclusion, the only option for Nigeria is to go the way of the Southeast presidential aspirant and unfortunately with a Northerner as his running mate. The 2023 presidential election is already a failure in the making, and if time is not taken and nothing is done to salvage this country Nigeria from the terrorists and their supporters, who are the so-called leaders in the persons of President Muhammadu Buhari and Nasir El-Rufai, the country is doomed. This is a clear picture that is painted about where Nigeria is right now and where it is headed. Only God and God alone can help Nigeria.