Posted on February 5, 2019 by giantabilitymn 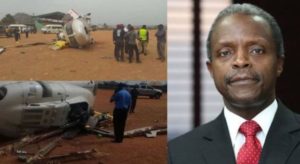 Nigeria’s Vice President, Yemi Osinbajo has attributed his survival of Saturday’s chopper crash in Kogi State to God’s mercy and the prayers of the General Overseer of the Redeemed Christian Church of God, Pastor Enoch Adeboye the night before.

Osinbajo revealed this on Sunday while giving testimony at the RCCG, City of Grace, Lokoja, Kogi State, the Nation reports.

Senior Special Assistant on Media and publicity, Laolu Akande, Osinbajo in a statement on Monday said “On Friday, we went to (RCCG) camp; usually, I attend our Holy Ghost service. We came in very late from Akwa Ibom State. In fact, we arrived just in time for the grace at the end of the service.

“Thereafter, our daddy in the Lord, (G.O) Pastor Adeboye, wanted to speak to me. He asked me how things were going on, the campaign activities and all that, and I explained everything; what I was doing on the campaign trail and all of that, some of the challenges.

“He then said, I am going to pray for you. He said a prayer that turned out to be very interesting because usually, as you know, he doesn’t pray for long.

“So, when the crash happened, immediately it dawned on me that the Lord God had led him to say that very special prayer. And the Lord God Almighty delivered us in accordance with His word that, “even when 10,000 fall by our side, no harm whatsoever will come near us.”

“I just want to thank the Almighty God for His grace and mercy that has been so abundant in my life and in all of our lives who are here,” he added.