Posted on September 12, 2018 by giantabilitymn 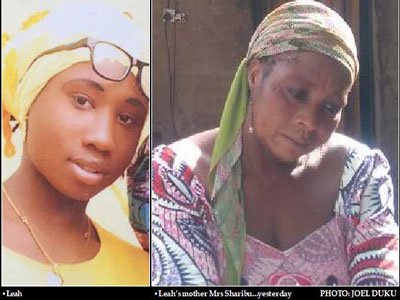 Leah is one of the 110 female students of Government Girls’ Science and Technical College, Dapchi, Yobe State abducted by the sect since February 19, 2018 and is yet unreleased because she refused to renounce her Christian faith.

Punch reports that the mother of the kidnapped girl, Rebecca Sharibu, told the President of the Arewa Christians and Indigenous Pastors Association (ACIPA), Luke Shehu that the illicit act was committed on Monday, September 10, 2018.

Rebecca, narrating the ordeal to the President of the ACIPA through a phone call said: “The thieves climbed the fence, entered through the window, stole their foodstuffs and a generator. They were not robbers but thieves and the family members were not in the house when the thieves visited.”

The unfortunate incident is happening barely 72 hours after the family got an award from the Arewa Christians and Indigenous Pastors Association in Jos.

ALSO READ:  Christian baker denies gays of a wedding cake
This entry was posted in Columns. Bookmark the permalink.